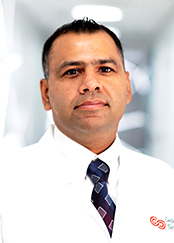 Dhruv Sareen, PhD, is the founding director of the (IPSC) Core Facility at the Cedars-Sinai and founding executive director of the new Cedars-Sinai Biomanufacturing Center. He is also the principal investigator of his laboratory. He completed his undergraduate degree at the University of Mumbai, Institute of Chemical Technology. He then went on to complete his Ph.D. in biomolecular chemistry and post-doctoral work on stem cells and neuroscience at the University of Wisconsin, Madison. Dr. Sareen has extensive experience with human induced pluripotent stem cells (iPSC)-based disease models, cell signaling, mechanistic drug discovery, process development of early research discoveries, and optimizing cGMP-compatible stem cell therapies. As iPS cells are an excellent source for creating typically inaccessible patient cells (such as brain or heart cells) from a simple blood draw, they form a critical component of his research interests;. Through a process called "reprogramming," he and his team take adult human cells back in time to their embryonic beginnings, when they were pluripotent, or capable of making any cell type in the body. Then they engineer them forward, in a process called "differentiation," into specific cell types of the brain, heart, intestines, and other organs. Using the iPS cells from the patient they reanimate specific cells of the body in a dish to learn about mechanisms for their deterioration, use them for drug screening and design the next generation of cellular therapies. The Sareen laboratory uses stem cells (iPSCs) to model diseases and explore tomorrows therapeutics. By differentiating stem cells into mature cells such as neurons, gastric and pancreatic organoids with endocrine and exocrine cells, we study the cellular signaling that underlies some of today's most intractable diseases, including diabetes, pancreatitis, neurological diseases like ALS, and COVID-19. Using gene editing, bioprinting, and other emerging tools, we seek to correct defects in a dish and then bring those treatments to patients through process development and translational activities. His lab has published many papers using iPSC-based models to study these diseases. Dr. Sareen and his team in the iPSC Core have created a bank of over 800 iPSCs available to academic and commercial institutions. The cells have been distributed worldwide. Dr. Sareen also is the inventor on many patents related to technologies in the field of iPS cells. As the Executive Director of the CBC, Dr. Sareen has led the development and establishment of a state-of-the art cGMP facility. The CBC is comprised of a cGMP cell biomanufacturing labs housing multiple cleanroom suites for clinical-grade cell production to be tested in human IND-enabling clinical trials and a human iPSC line and differentiation lab with automation for commercial-grade manufacturing of iPSCs and their differentiated cell types for research purposes. Both labs within the center can serve academic, clinical and commercial investigators, providing a much-needed facility to develop and manufacture cell-based products suitable for investigational use in humans as well as for mechanistic drug discovery programs. Dr. Sareen strongly believes that modern therapeutic programs should form meaningful symbiotic partnerships between academic and industry partners even at a nascent stage of technology development.