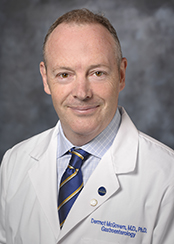 Dermot McGovern completed his GI fellowship and obtained a PhD in complex disease genetics at the University of Oxford, England before moving to Cedars-Sinai, Los Angeles 11 years ago. Dr McGovern is the Director of Translational Medicine at the F. Widjaja Foundation Imflammatory Bowel and Immunobiology Research Institute at Cedars-Sinai and also directs the Cedars-Sinai Precision Medicine Initiative. He holds the Joshua and Lisa Greer Endowed Chair in IBD Genetics. Dr. McGovern’s clinical interests include the extra-intestinal complications of IBD and also the overlap between IBD and other immune-mediated and metabolic diseases. Dr. McGovern serves on the National Scientific Advisory Committee for the Crohn’s and Colitis Foundation as well as the steering committees of the National and International IBD Genetics Consortia. He also chairs the CCFA local advisory medical committee. Dr. McGovern serves on the editorial board for the IBD Journal. He has been elected a member of the American Society for Clinical Investigation (ASCI) and also the International Organization for the Study of IBD (IOIBD). Dr. McGovern’s group is funded by the NIH to study the effect of genetics on the susceptibility to and natural history of IBD in diverse populations. Dr McGovern’s group analyze multi’-omic’ datasets to identify potential biomarkers and therapeutic targets of IBD that ‘feed’ the Drug Development Unit he co-directs. His group also have a significant interest in the pharmacogenetics of therapies used in IBD. Extending these studies to diverse populations including African-Americans, Hispanics, and the Ashkenazi Jewish population is a major focus of his group. His group is also funded by the Crohn’s and Colitis Foundation, The Litwin Foundation, and the Helmsley Charitable Trust. Dr. McGovern’s group have published approximately 150 peer-reviewed papers in journals including Nature, Science, Cell, Nature Genetics, The Lancet, and Gastroenterology.

View CV as a PDF