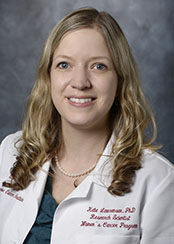 The research of Kate Lawrenson, PhD, focuses on the role of the non-coding genome in the biology of and susceptibility to ovarian cancer. Her lab uses novel subtype-specific in vitro and in vivo models of ovarian cancer to elucidate the function of candidate susceptibility variants and their target genes, coupled with state-of-the-art next generation sequencing-based methodologies to characterize the ovarian cancer genome, transcriptome and epigenome. The overarching aim of Lawrenson's research is to identify new markers and targets that could ultimately be used clinically to reduce morbidity and mortality associated with ovarian carcinoma.